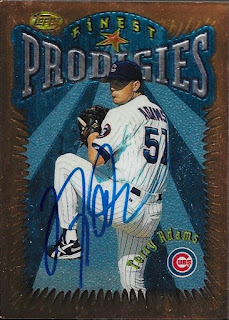 I have been picking up some cared here and there at my LCS to send TTM.  The shop has a bunch of nice late 90s cards that I never got to pick up when they were live, since I was out of the hobby at that time.  Picking up these cards has helped me find some nice gems to send TTM.  The above 1996 Finest Prodigies card is a fine example.  It also is an example of my learning more and more about getting cards signed.  I rubbed this card up with one of Chris's pencil top erasers in order to assist in making the auto "stick" without beading and smearing.  I must have done a good job, because the auto turned out really nice.  The scan really doesn't do well for this card, as it looks great in person. 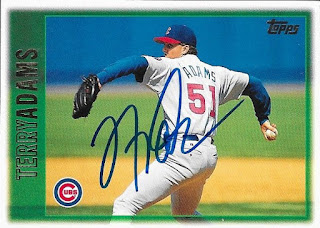 I also was able to add a nice horizontal card to the auto collection.  This one looks really great.  I also didn't have very many 1997 Topps, yet, so this will bump that number up. 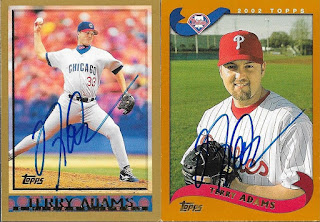 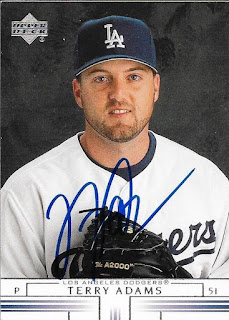 Finally, here is a nice 2002 Upper Deck.  This is a really sharp-looking set from the early 2000s that may be overlooked.  I'm not the biggest UD fan, but they did sport some nice sets from time to time.  It's just too bad they dug their own grave.

I mailed these cards to Terry Adams on November 9 and got the cards back on November 18, for a 9-day TAT.