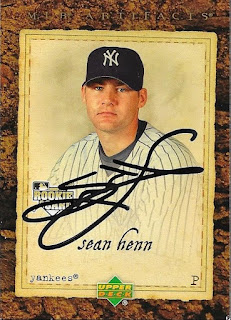 I received a pretty cool TTM success on Monday when I got two signed cards back from former pitcher, Sean Henn.  I actually got the above 2007 MLB Artifacts out of a box of cards that my friend, Pete, gave me.  When I saw that Henn signed TTM, I figured these would be nice "different" cards to add to my binder. 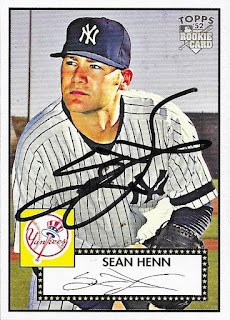 I busted a box of these 2007 Topps Rookie 52 cards back when they came out.  I had put the bulk of them away in my rookie box, and fished this out for the TTM attempt.  It turned out really nice.

I mailed the two cards to Henn on November 2 and got the cards back on November 14, for a 12-day TAT.
Posted by William Regenthal at 8:17 PM