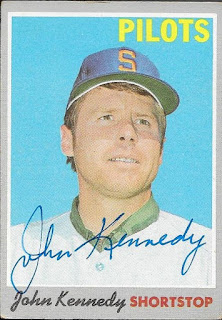 It almost worked out that this TTM success would be shown on November 22, but my success from Steve Balboni made it not line up.  This is probably good, because I doubt many people would have gotten the irony of my posting of a John Kennedy card on November 22.  Anyway, I know that was a stretch, but hey everyone, I got a TTM success from John Kennedy.  What makes this better is that it is yet another Seattle Pilots card.  I have lost count on all of the living Pilots that I have gotten, but I know it is quite a few.

I mailed to Kennedy on November 9 and got the card back on November 17, for a \n 8-day TAT.