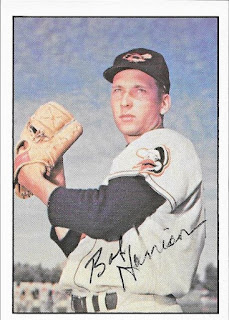 I was going through my Orioles box and found this one lonely 1979 TCMA among the cards of past Orioles.  A check to sportscollectors.net showed that the guy depicted on the card, Bob Harrison had a great return rate via TTM, so I figured I would put the card to use.  I mailed the card out on November 7 and the card came back on November 15, for an 8-day TAT.

Harrison was signed by the New York Giants prior to the 1949 season, then was picked up by the St. Louis Browns via the minor league draft in 1950.  He remained in the Browns/Orioles system until he received his call-up to the Majors.  His minor league stats are incomplete, as most older players like that are known to be.  His baseball-reference page shows that he also spent a season in Cleveland's system.  From the stats that hey have, Harrison had a mnor league record of 66-85.  His ERA stats are incomplete.

I'm glad I sent off this card for a TTM autograph.  Otherwise, I would have never known that this former Oriole ever made it to the big club.  Now, I have his autograph and can put it with the rest of my former Orioles.
Posted by William Regenthal at 7:14 AM