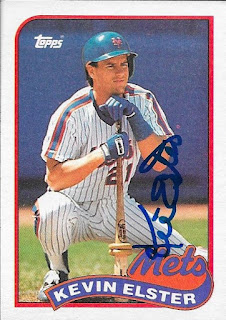 Ah, look at that 1989 Topps.  To me, that is still one of the underrated Topps issues, especially since it is a big part of the "overproduction era."  The set is important to me, though, because it represents the first baseball cards that I ever owned.  So, whenever I am deciding on which cards to send to a former player, 1989 is one that oftentimes finds its way into the envelope.

I sent four cards to Kevin Elster on November 9 and got the cards back on November 19, for a 10-day TAT. 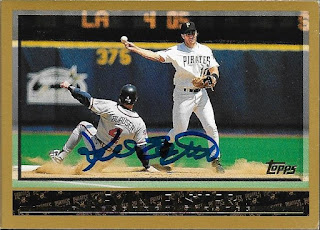 Another horizontal card was a must in this submission.  They always turn out great, and this 1998 Topps didn't disappoint.  The only issue is that the foil name on the card doesn't scan all that well, but I don't feel like it takes anything away. 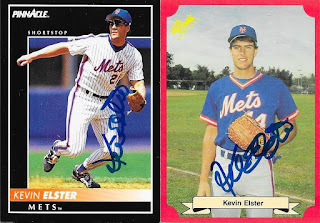 Here are the two other cards I sent for signature.  I found the 1988 Classic at my LCS after the shop owner let me dig through boxes in the back room.  I grabbed a few of them to send off so they would be represented in my album.  The 1992 Pinnacle (on the left) is just a nice-looking card that I thought would look even better with a signature.  It turned out pretty well; the blue Sharpie fitting in nicely, even though Elster signed it in an odd direction to the photo.