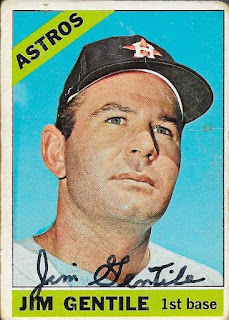 I was able to turn a couple cards that had been lying dormant in my Orioles box into some TTM successes.  I got two cards back from former Oriole, Jim Gentile, today.  I sent him the above 1966 Topps that was fairly beat up and wouldn't have been a consideration for any 1966 set I would attempt to put together in the future.  So, I figured it would be a good candidate to send TTM.  It turned out really nice, regardless of the creases in the card. 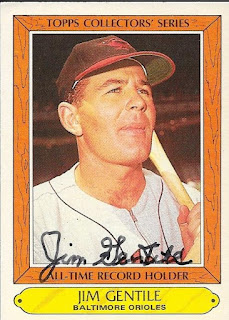 I had two of these 1985 Topps All-Time Record Holder cards and sent both along.  I got one back, Gentile opting to keep the extra.  That's fine, this one still looks great.  This is the first of this kind of card that I have been able to get signed.  My plan, now, with TTMs is to just send along "different" stuff.  I'll still consider Topps base cards as a main option, but I now want to see cool inserts and other odd stuff come back signed and end up in my album.  I think it will keep the TTM game fresh for me if I am continuing to try to find different kinds of cards to include and not limit myself to just Topps stuff.

I mailed to Gentile on October 24 and got my cards back today for an 11-day TAT.
Posted by William Regenthal at 6:48 PM