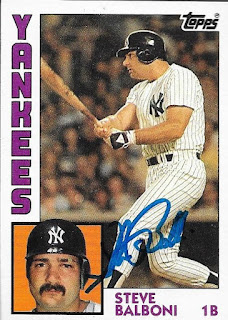 I received a TTM success from another former Yankee, this time, one from Steve Balboni.  I mailed him 2 cards, but he only signed one.  The above 1984 Topps turned out nice, so there are no complaints.  I mailed to him on November 3 and got the card back on November 17, for a 14-day TAT.  He also returned the other card, unsigned.  It was a 1987 Topps.