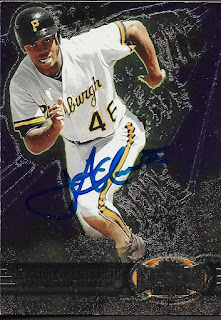 I have been making frequent stops at my LCS to ick up some really cool cards from the mid-90s to try for some TTMs.  The shop owner has a box of cards like Bowman's Best, Fleer Metal, Fleer Ultra Gold Medallion, etc that I have really wanted to see come back signed.  The above 1997 Fleer Metal Jermaine Allensworth is a prime example of the kinds of stuff I have been really excited to see come back. 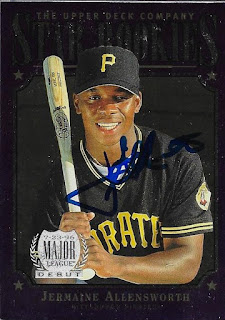 Of the four Allensworth cards that I sent, this one was the only one that I had found in my own collection.  The others were ones I pulled from the box at my LCS.  I was content in just sending this one card to him, but when I found the others at the shop, that added to my excitement about going ahead and sending these out. 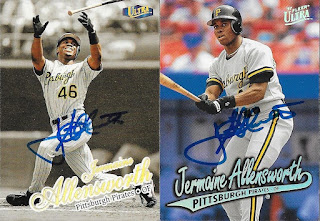 The scans of the top two cards don't really do them justice.  They look great in person.  The scans of these two cards, though, really turned out nice.  These are two different years of Fleer Ultra Gold Medallion.  The card on the left is a 1998 Gold Medallion and the card on the right is a 1997.  The 98 looks more like a Flair product (man I miss that set) and the 97 looks more like a tipical Fleer Ultra offering.

I mailed to Allensworth on November 1 and got the cards back on November 12, for an 11-day TAT.
Posted by William Regenthal at 6:33 PM