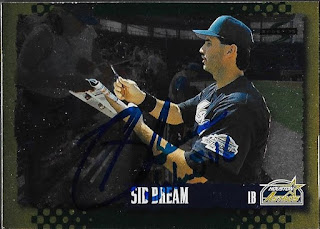 There are a few players in my "to be TTMed" box that have sat in there for quite a while, now.  Mostly because the player charges a fee for an auto and I rarely have cash.  I finally was able to send off for one player recently, Sid Bream.  Bream signs for $1.00 per card, and I had $7.00 that I could send, so I went ahead and knocked him off of my list.

The above 1995 Score Gold Rush didn't scan all that great, but it was a card that I was most excited to see come back.  It looks great, in person. 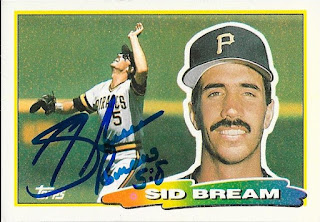 I got a box of cards from my brother, John, a while back that had a ton of these Topps Big cards.  I pulled quite a few of the guys that I knew signed TTM, and one of these made the cut when I was selecting Bream cards to send out.  I'm really glad I sent this one because not only does it look good when signed, but it also scanned great as well. 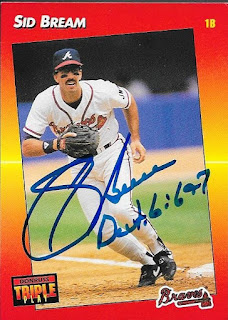 I have a soft spot for 1992 Donruss Triple Play.  I had built the complete set once as a kid, only to leave it lying around and it got displaced.  Oops.  The cards aren't worth much at all, but they look great when scanned, and turn out really well when signed. 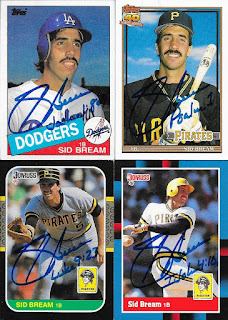 I had so many Bream cards, I had a bit of a hard time deciding which to send off.  I decided on a couple Topps cards to add to my yearly tallies, and a couple under-represented Donruss cards.  The 1988 Donruss turned out really nice.  I have cards from that year coming out of my ears, so it was nice to be able to take at least one of them and give it a home in my TTM/IP album.

I mailed to Bream on November 1 and got the cards back on November 10, for a 9-day TAT.  He charges $1.00 per card and includes a bible verse on each card.  He also has a really nice signature.
Posted by William Regenthal at 4:35 PM