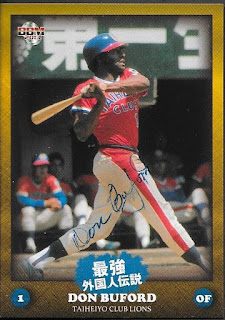 I'm always happy to receive TTM successes from former Orioles.  When I got this one in from Don Buford, I was equally excited that I was able to get signed one of the Japanese cards that my friend Ryan gave me.  I had hoped that Buford would sign it in blue sharpie, but the ballpoint pen will have to do.  The card is still really cool, and will look nice in my album. 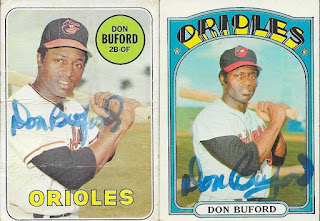 I was also able to repurpose a beat up 1969 Topps that had been in my Orioles box.  I also raided my 1972 Topps partial set to add another card to the package.  They all turned out pretty nice, I think.

I mailed to Buford on November 5 and got the cards back on November 12 for a 7-day TAT.  I sent along $5.00 to cover his signing fee.
Posted by William Regenthal at 5:47 PM