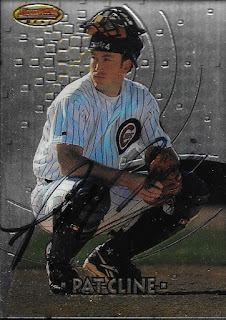 I'm learning all of the time about tricks and stuff concerning TTMs and autographing.  I'm 36, but I am really late to the game with some of this.  So, I have been taking information from my much younger friends on the art of collecting autographs.  One such trick I have picked up is that you should rub up a chrome card (or use baby powder) so the autograph holds better.

This is the first chrome card I have gotten back since I have been using one of Chris's school erasers to rub up a card.  Unfortunately for me, the jury is still out on whether or not I did a good job, because the sharpie used for this card looks like it was just about dead.  Not complaining at all, I can still see the auto, and the card is cool, so I will continue to wait and see what other chromes I sent out look like when they come back.

This is a 1997 Bowman's Best that I got signed by former Cub prospect, Pat Cline.  I mailed to Cline on November 7 and the card came back on November 14, for a 7-day TAT.

Cline (b. 1974) never broke into the majors.  He was a 6th round pick in the 1993 amateur draft and bounced around the Cubs, Brewers and Reds systems.  He reached AAA with the Cubs and Brewers systems before calling it a career in 2000 at the age of 25.
Posted by William Regenthal at 6:14 PM