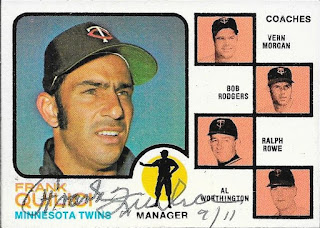 I grabbed a bunch of late 60s/early 70s cards from my LCS that I hoped to use for TTMs.  I've been getting a good deal on the cards, so I have stocked up and sent a bunch out recently.  One of the first batches to come back came from Frank Quilici on these three cards.

I didn't have very many extra 1973s at all, so I made sure to get this one signed.  It also is a nice representation of the manager cards from that set.  Quilici signed it in ballpoint pen and inscribed with his uniform numbers 7/11. 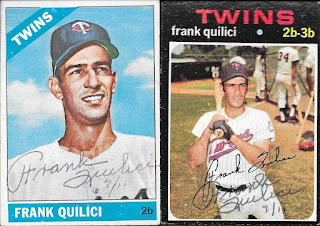 I added a couple other years of Topps as well, with the above 1966 and 1971 cards.  Quilici also answered my questions, the first to do so in quite a while, even though I ask questions of most all of my TTM requests.  I asked him:

Who was the pitcher that you loved to face?
None of them! Haha!

What would you say was the proudest moment of your career?
When my Mom and Dad in the park when I was playing 2nd base.

Pretty simple and to the point, but I always love getting a response from the players.  I save all of the notes that they send back.

I mailed to Quilici on November 12 and got the cards back on November 19, for a 7-day TAT.
Posted by William Regenthal at 5:37 PM