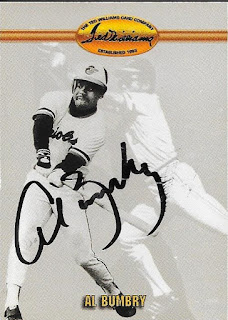 A TTM request I sent back in May finally came Saturday when I received 6 cards from former Oriole, Al Bumbry.  I have met Bumbry at Camden Yards, and also got a ball signed by him in a Tristar Mystery box, but I wanted to see if I could get a TTM return of him on some cards I've had for years in an Orioles album.  I had so many cards to choose from for Bumbry, I really enjoyed the selection process of what I wanted to send him.  I didn't have any cards signed from this 1993 Ted Williams product, so I figured this one would look nice.  The auto smeared just a touch, but the card still looks great! 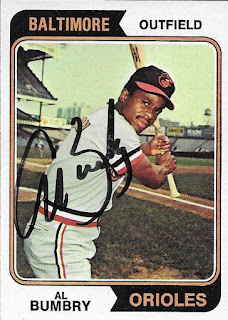 This card marks only the fourth 1974 that I have been able to get signed.  I don't have any bulk '74s at all, so that year is very under represented in my auto album. 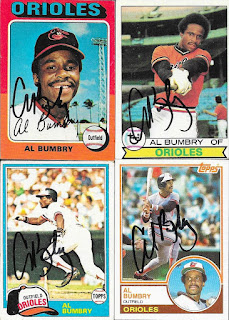 I have quite a few 75s, thanks to my buddy, Max, but the one I got from Bumbry (top left) was in my album.  I probably got the card when I was building the 75 set years ago.  Same with the other cards in this scan.  They all came out of my O's album.  Now, they will be transferred into my autograph album.  Speaking of albums, I have not started my third autograph album, after filling up two others to capacity with IP/TTM autos.