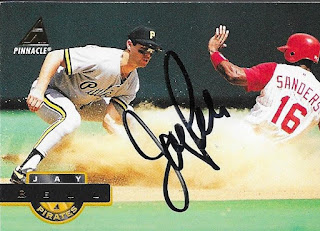 Yesterday, a ton of TTMs came rolling in, after not receiving many this past week.  Now, with no mail today, I might be able to catch up a little bit.  Maybe not.  Anyway, I was really happy with this TTM success from Jay Bell.  I was able to get some great cards signed, a few of which I picked up at my LCS.

The above 1994 Pinnacle might be my favorite of the bunch, and I believe it either came from one of the boxes Mom got me, or it may even be from my original childhood collection.  I don't remember, but regardless, it is a great shot.  Horizontal cards always look best when signed, and this one does as well.  The action shot helps also! 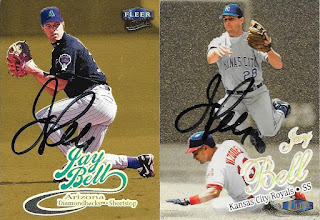 I'm pretty sure that these two Fleer Ultra Gold Medallion cards came from my LCS, I believe.  They are from 1998 and 1999 and both look really cool.  I was out of the hobby when these came out, but I think I would have really enjoyed opening packs of this had I stuck around. 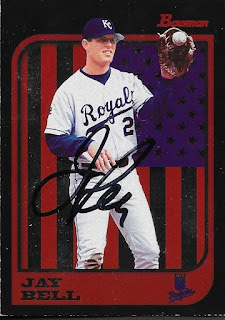 Finally, here is a 1997 Bowman.  I guess this is Bowman Chrome, but it is more foil than chrome, so I don't really know.  The card looks great, though.  I'm really happy I found this at the LCS and was able to get it signed.

I mailed to Bell on October 24 and got the cards back yesterday for a 17-day TAT.
Posted by William Regenthal at 5:51 PM