A Surprise Package From Max 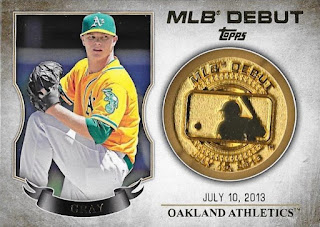 I was surprised the other day when there was a large bubble mailer in my mailbox from my good buddy, Max.  I wasn't expecting anything from him, so I was happy to see what was inside.  He hooked me up with some nice Orioles cards and a few other cards for various PCs.

This Sonny Gray MLB debut coin card was pretty nice.  I have had a nice side PC of Gray going lately, and it has been easier to pick up some of his stuff, since he had such a terrible year this year.  I have confidence that he will bounce back, I just hope it is with the A's and not after he is traded somewhere like the Yankees, as has been rumored. 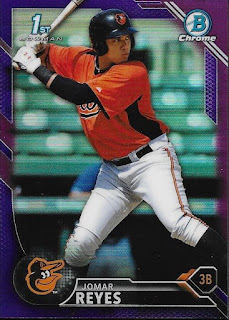 This purple parallel from 2016 Bowman of Jomar Reyes is also a nice card.  It is numbered 119/250 and looks really sharp in person.  Reyes also had a down year this year, but should bounce back.  He is one of the Orioles top prospects and hopefully will contribute to the MLB club soon. 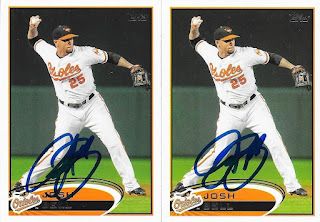 Finally, Max included these two 2012 Topps IP autos of former Oriole, Josh Bell.  Bell was acquired (along with Steve Johnson) from the Dodgers in 2009 for former closer, George Sherrill.  He never really got going with the O's, batting only .200 across 79 games.

Thanks so much for the package, Max!
Posted by William Regenthal at 9:51 PM