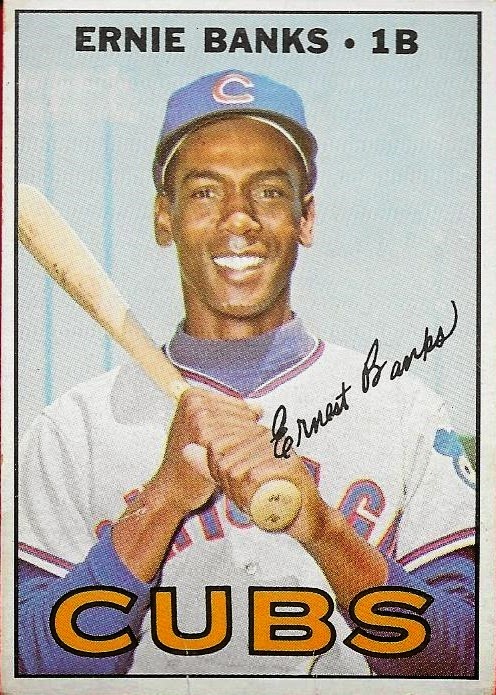 The world lost Ernie Banks last night at the age of 83, just days shy of his 84th birthday.  I had talked to my friend, Max a few days ago.  He was set to meet Banks at Cubs Fest, but Banks cancelled due to illness.  He was upset that he didn't get to meet him, and I was upset for him.  My good friend, Drew, met Mr. Banks a few years ago at the White Plains show, and had a memorable time.  I know it is something Drew will never forget.

Banks was one of my favorite non-Oriole Hall of Famers.  You never heard a bad thing about him.  He symbolized what is right about baseball.  Enjoying playing the game you love, regardless of playing a league record 2,528 games without reaching the post season.

I was happy that Banks was one of my biggest TTM successes.  It was also really cool that he appeared on stage with Pearl Jam during their concert at Wrigley Field in July 2013.  I have my ball signed by Banks which is inscribed "Pearl Jam Rocker - 7/19/13".  Also, since Pearl Jam records every concert and makes them available to fans, I have the bootleg saved on my computer.  Just the other day, I listened to Eddie introduce Banks to the rain-soaked crowd.  Banks speaks for a bit on the recording, which is really cool.

I'm sad to see Ernie Banks pass away, but I'm even sadder for the friends I have that were Banks and/or Cubs fans.  He was a legend in the sport, and he will be missed.  Where he is now, I hope the sun is shining, it's a beautiful day and hey, Let's play two...

Rest in peace, Ernie Banks.
Posted by William Regenthal at 9:06 AM