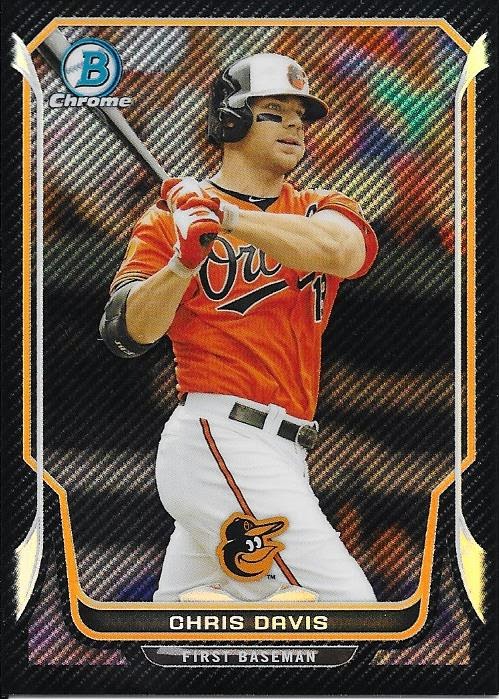 I sold an extra signed ball that I had to my buddy Joey last week.  The money that he sent via PayPal went a long way toward easing a dry spell I have had when it comes to buying cards.  With my wife being out of work, still, due to her foot surgery, my card buying had been strictly limited to next to nothing.  I have sold a few things recently, and that has brought me enough money to purchase my Series 1 boxes that I have ordered.  It's really nice when your hobby can fund itself.

So, when Joey paid me for the ball, I decided that I should turn the money into some PC needs.  I had seen quite a few of the new color parallels from Bowman Chrome and Bowman base and I really like them. I spent a few hours on Skype with the guys (Scott, Max, Caleb and Noah) and during our chats, I flipped around Ebay and priced a bunch of the different Davis parallels.

The first card to come in from that buying session was this 2014 Bowman Chrome Chris Davis carbon fiber parallel.  I have always liked their "wave" and "ice" parallels, so when I saw this one, I instantly loved it.  I hesitated to put it into my cart, however, because the price tag (at $19.99 shipped) almost wiped out my entire budget.  After cruising Ebay a little more and adding a few cheaper parallels, I realized that I still had enough for the carbon fiber one.  So, I added it to my cart and made my purchase.  The best part was, I shopped smartly, so, I ended up with nearly $5.00 left in my PayPal (enough for an Ebay steal that will be shown in a later post).

So, this carbon fiber parallel looks really awesome and is numbered 5/10.  That's even better!  Check back in a few days to see the other parallels that I picked up.  In the meantime, stay warm out there!
Posted by William Regenthal at 7:59 AM