1969 Topps Hall of Famers From The Kinston Shop

Last Friday, when I picked up those 1959 Topps I wrote about, I found a bunch of 1969 Topps for my set.  The highlights are two Hall of Famers that I was able to get very cheaply.  The first is the below Hoyt Wilhelm. 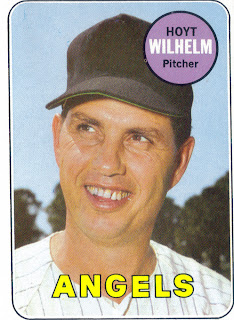 I also got this Luis Aparicio.  It was an Aparicio day that day because I also got his 1959 card.  I thought I had grabbed an Orlando Cepeda as well, but I think I got mixed up between Aparicio and Cepeda.  that gives me a good reason to go back through his vintage offerings this week when I go in there to redeem my Prime 9 redemption. 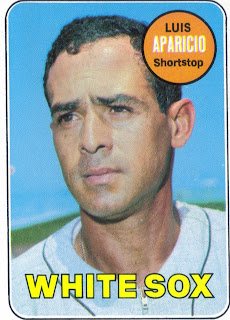 It is still a long road ahead for my 1959 and 1969 sets, but I made a nice dent in them this past Friday.  I think I will attack them even harder at the upcoming card show on April 7th.
Posted by William Regenthal at 5:39 PM

Hoyt's 1969 issue is probably my least favorite of him during his playing days, but even his worst card is better than most other cards in my collection. :)