I was looking at my want lists the other day and realized how stagnant they have become.  I have been neglecting my set needs while adding to my Hall of Fame baseball collection.  I needed to knock some numbers off of as many lists as possible so I can maybe, finally, make some room for new sets.  It has become increasingly difficult to find what I need at card shows, so completing some of my sets might push me toward looking into something different.

One set that I have been working on forever, and will continue to work on until I magically find an affordable copy of the Yogi Berra RC is my 1948 Bowman set.  The set has a very low card count, only 48 of them, but man oh man, look at the big names who have 'rookie cards' in the set:  Stan Musial, Bob Feller, Warren Spahn, Red Schoendienst, Ralph Kiner, Yogi Berra... etc etc.  I got lucky on all of those except the Yogi.  I'm waiting on him.  Until then, I have to chip away at the other guys in the set.  One such card I was able to get off of Sportlots for $10.00.  The card is in rough shape, but they all have to be in order for me to afford them.  I am, of course, talking about the below card #41, Rex Barney. 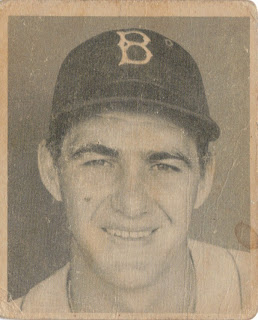 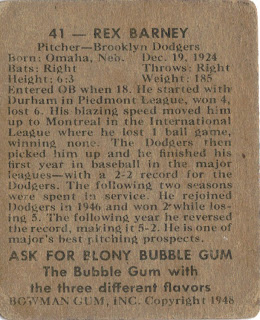 Posted by William Regenthal at 6:30 PM