Finally, another TTM has come in.  I sent a ball to Dave Parker on March 10 and got it back today, March 16.  A 6-day turnaround, which is pretty darn fast!  I had to send a check for $25 to Mr. Parker for the signature, but I believe it was well worth it. 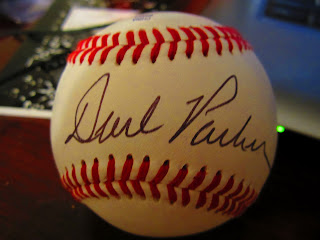 I wish I had thought to ask for an inscription, but I didn't think of it when I wrote my note to him.  It would have been nice to get 'Cobra' inscribed on the ball.  Oh well.  It still looks great! 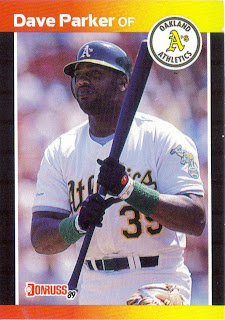 Chris and I went to the Kinston card shop and picked up a bunch of stuff to be blogged later, but I thought it was cool when he opened his 50 cent pack of 1989 Donruss and got this Dave Parker card.  It worked out perfectly.

I'm really glad I got a TTM in, I was starting to get worried.  He is now my 48th TTM success.  Here's to hoping I get a few more in the coming days.
Posted by William Regenthal at 9:00 PM

Looks amazing! Just curious, do you send a pen with the package?