I recently completed a trade with Johnny from I Collect Stuff 2.  I sent him some Braves cards (Chris also sent him a Dale Murphy hologram).  He hooked Chris up with this really awesome 2007 Bowman Chrome Tim Lincecum.  I'm certain that we didn't have this already, so it was an awesome trade for Chris. 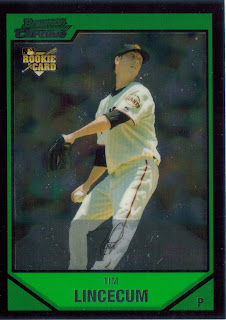 I also got an assortment of Orioles cards, one of which is the below Nick Markakis 2011 Topps Chrome.  I remember thinking when I pulled the Markakis base card out of 2011 Topps, that it would look awesome as a chrome.  I was right! 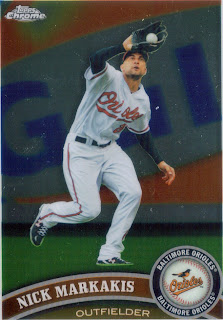 Thanks for the trade Johnny.  I'll keep a lookout for some more stuff for you!
Posted by William Regenthal at 8:03 PM

Glad you enjoyed again sorry about only one Lincecum I searched high and low didn't have much of him at all!

Thanks for the Trade!