No mail today.  So, I'll show you the cards I got for myself at the Kinston card shop this past Saturday.  Not only did I get myself a few things, but I also found some stuff for my friends Drew, Scott and Andrew.  I picked up a Thurman Munson card for Drew, A 1957 Topps Mel Parnell and a 2004 Playoff Prestige Achievements Carl Yastrzemski for Scott and a 2008 Donruss Elite Extra Edition Lance Lynn auto numbered 570/570 for Andrew.  All very cheaply.

However, I did take care of myself some, too.  I picked up my Week 6 Prime 9 giveaway, Mickey Mantle (which I most likely will show in a later post) as well as the following cards. 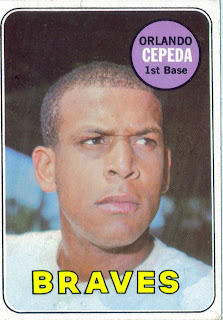 I noticed when I got home last week that I had accidentally bypassed the 1969 Orlando Cepeda, so I went back Saturday determined to knock it off of my want list.  I was able to get it to scan fully, and the card looks great.  Another Hall of Famer has been knocked off of the set list. 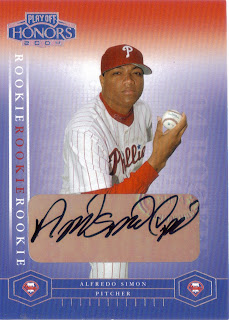 Not to downplay a good deed I did for fellow bloggers, but the 'gift' cards I got were all in a box of 6/$10 cards I found at the shop.  Lots of autos and relics were in the box, and I found a few things in there that I wanted, so I didn't feel too bad when I spotted some that made me think "Oh, so and so would like this..."  I saw a few things that caught my eye, like the above Alfredo Simon rookie auto.  Not a bad card for less than 2 bucks.  Simon has been a really underrated pitcher for the Orioles, and I hope he can continue that.  He has been a starter, long reliever and closer in his brief Orioles career. 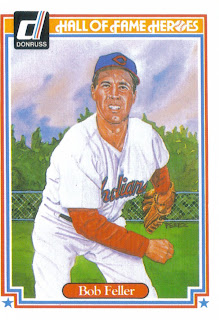 Finally, I found this really nice 2003 Donruss Hall of Fame Heroes Bob Feller.  I really like Feller.  I was chatting with a friend on Facebook the other night and the topic of meeting former players came up and he told me how he was able to meet Feller in person.  Oh man, I was so JEALOUS!  I would have loved the opportunity to meet Feller in person.  What an amazing American Feller was.  He will go down as probably my second favorite pitcher of all time, behind the awesome Virgil Trucks.

Anyway, I thought I'd share with you the stuff I found in the discounted box at the shop.  I hope they replenish the vintage and discount offerings at the shop because I really enjoy finding stuff there.
Posted by William Regenthal at 7:10 PM

I just realized... I've NEVER purchased single cards at a LCS. I guess I keep convincing myself that if I find anything I'd like at a LCS that I could get it cheaper online. :\

I like the Feller! There is a good bit of 83 Donruss Hall of Fame Heroes cards autoed (w/PSA/DNA cert) on eBay. It's an awesome set with a great checklist.