Some New Orioles Shirts for a New Season

Ask my brothers.  They'll tell you that my wardrobe consists of old racing, concert, wrestling and baseball shirts.  When my brother Philip wants a new shirt, he will drop $100 on an Affliction shirt.  My brother Adam has always been stylish, wearing name brand dress shirts.  They both joke that when William wants a new shirt, he just goes to a wrestling match, concert or baseball game, spends $20 bucks and wears the shirt out until it can't be worn anymore.  Yeah, they are pretty much right.  It isn't as simplified as that, but yeah, I'll accept it. 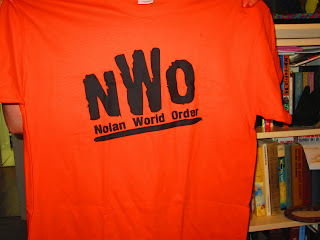 This one is based on Nolan Reimold's supposed fandom of wrestling (which I need to confirm).  A take on the old WCW NWO (New World Order) that revolutionized 'Sports Entertainment' in the late 1990's but was run into the ground by the same WCW in the early 2000's.  I thought this shirt would be pretty awesome since Nolan is my favorite player now. 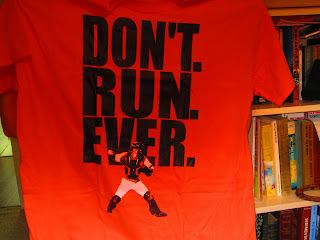 Not far off of Nolan's heels, though, as far as favorite players go, is Matt Wieters.  I thought this shirt was a pretty good showing of his anti-aircraft, I mean, anti-baserunner skills.  Wieters has a cannon for an arm and opposing teams are learning the hard way not to run off of Matt.

So, there you go, Adam and Philip.  I got 2 new shirts.  Spent more than $20 and didn't have to go to a concert, wrestling match or race to get them.  I went to a baseball site instead.
Posted by William Regenthal at 5:41 PM

These are awesome shirts.

Yes nolan loved wrestling in the 90s, I'm his brother and every Monday night was incredible, waiting for the wolfpack and Goldberg. Enjoyed wwf just as much! Where can I get one of those shirts?

John, I hope you see this response. My blog hasn't made it easy to reply to individual comments, but here is the link to the site I got them from: http://protectthisyard.spreadshirt.com/-I11836040

Thanks for reading the blog!!