Some Cards From Schuyler

I met Schuyler (from the blog Schuyler's Stuff) through Drew.  They are very close friends.  Schuyler's parents run a bookstore in Millbrook, New York called Merritt Books; I actually picked up a few books from them around Christmas time.  One of which was a biography of Jimmie Foxx.  Since they are an independent bookstore, and a local business in that area, I plan on doing more of my book shopping through them, instead of big box stores or Amazon.  I feel like Schuyler is a really nice kid and I definitely want to give them a hand if I am able.  Schuyler is a big Yankee fan, like Drew, but since Drew gets most of my Yankee pulls (and Pete gets the rest), it is really hard coming up with something Schuyler would like. That is why i send him all of my Team USA cards.  I got a package from Schuyler today that consisted of a few Orioles cards that he has had for a long time as well as a 2010 Shea Stadium calendar that I promised to 'The Brooklyn Met.'  Here are a couple highlights: 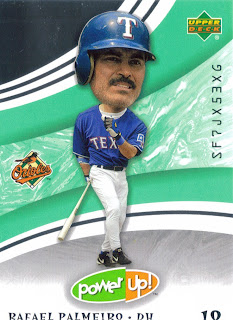 Here is a 2004 Upper Deck Power Up Rafael Palmeiro.  Hmmm, his head got bigger.  Weird. 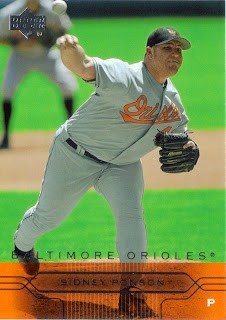 Here is a 2005 Upper Deck card of Sir Sidney Ponson.  Did you know that Sid is a knight in Aruba?  So, yeah, he is definitely referred to as Sir Sidney. 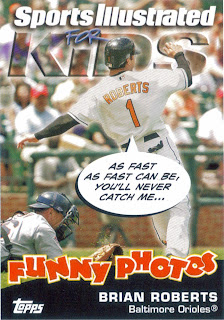 Finally, here is a 2006 Topps Opening Day Brian Roberts 'Funny Photos.'  I remember the days when Roberts was 'fast as fast could be...' but those days are long gone.  It is a shame that he has missed so much time lately.  I really hope that he can make it back and be healthy, after dealing with concussion issues for over a year.

Thanks so much for the cards, Schuyler.  I hope you all will pay his blog a visit and give him some followers.
Posted by William Regenthal at 6:40 PM

Thanks for promoting me and my dad's store! Next time I can, I'll send you some more. And thanks for all the USA cards!