I didn't get any mail today.  Trades are drying up and I've been working 11 and 12-hour days.  I almost didn't post today for the first time since sometime in December or January.  I don't even remember the last day I took off from the blog.  I just wasn't feeling it today, until I realized that with company coming this weekend that I needed to clean my office/computer room.  Upon straightening up, I saw that I had my ebay stack of 2010 Topps Reimolds.  I lack only the 2010 Topps Black parallel (or printing plates, but I don't count those in these...) for a full 2010 Reimold Rainbow, but that seems to be par for the course for me on these.  One of these days, I'll buy all of the black parallels I need. 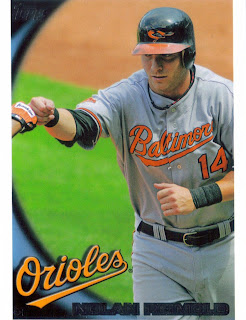 Yeah, so, I had no idea that Nolan doesn't have any 2010 Topps Chrome cards.  He has a Chrome Heritage, but that doesn't fit into the Reimold Rainbow.  Oh well.  Makes it a little easier to get all of his 2010 Topps variations. 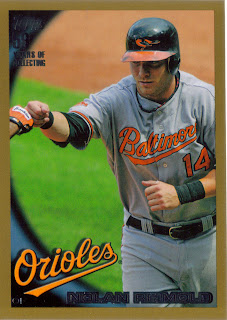 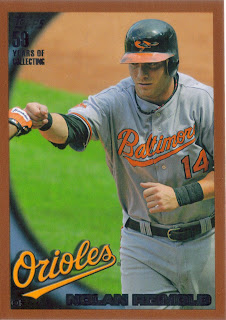 I busted at least 6 jumbo boxes of 2010 Topps and had no clue that they had Copper parallels.  I found this one on Ebay and honestly figured that it was just a seller who wasn't smart enough to tell the difference between Gold and Copper.  I mean, we can't all have a base knowledge in metallurgy, can we?  I don't, I'm just saying...  Anyway, I got the card and it is Copper.  Numbered 18/399. 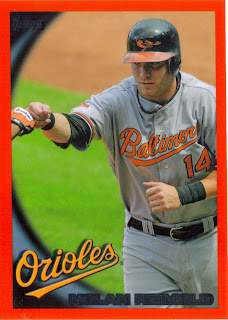 I like the factory set exclusive red parallels.  This one cost me a dollar and it numbered 5/299.  I just realized that I have some nice low serial numbers.  Pretty cool. 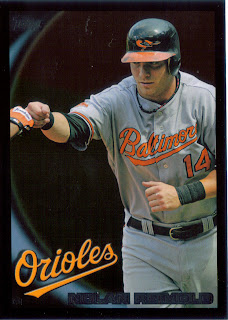 Finally, here is the Wal Mart Black Parallel.  This one isn't numbered.  No big deal.  Anyway, I need to work on the serial numbered Black Parallels for 2010, 2011 and 2012 for Reimold.  Of course, if he gets into 2012 Chrome, I will have a few more parallels to chase.  I'm hoping that is the case.
Posted by William Regenthal at 8:42 PM

Good Job! I'm still looking for a Black, Copper and Factory Set Red. It looks like you are missing the Target Throwback unless you forgot to scan it.