I received a signed ball today from former Phillies second baseman, Ford 'Moon' Mullen.  He played one season (1944) with the Phillies. 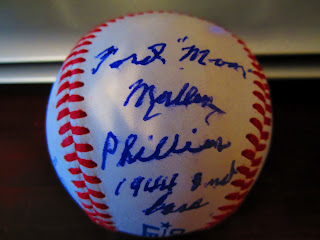 Sweet. It's really nice when the player puts more of the item than just a signature.

How in the heck do you do a baseball TTM? I'd be afraid it would be too much work for the signer to (re)assemble the return package.

Send me an email and I will be happy to explain my method.

Dang Man - how do you find these guys? I had to look up Moon Mullen...nice two sport athlete addition.