It has been a while since I got my last TTM success.  The last success I got was on February 14, Freddy Schmidt.  It isn't for a lack of trying, though.  I had nine balls pending and got one back on Friday, March 2. 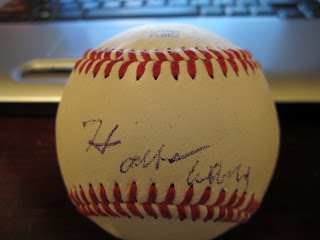 I originally thought I was going to be out of town for work through Saturday night, but as it turned out, the weather allowed for me to get home Friday evening.  I came home to a LOT of mail (a few more 1970 Topps and some more Nolan Reimolds for more Reimold rainbows).

There was also one of my trusty recycled mailers that found its way back to my desk.  Inside was the above signed baseball from 95-year old Ray Hathaway.

In case anyone was wondering, the other TTMs I have pending are:
I hope to get some of them back soon.  I have pretty much given up on the Berras.  I saw at both times that he was signing for free, but I guess I didn't get lucky.  Oh well.
Posted by William Regenthal at 5:19 PM