On Friday, not only did I get mail, but Christopher got some as well.  When he got his report card a few weeks ago, he got an 'Unsatisfactory' on his handwriting.  One of the suggestions to improving his handwriting (which I have NO idea where he gets bad handwriting from cough cough me cough) was to write letters to people.  The first letter he wrote was to my grandma, which Chris decided all on his own.  I thought that was really sweet of him.  The second one he did was my idea.  I told Chris that it would be a good idea to try to write a letter to a baseball player.  He had already sent one as a thank you to Virgil Trucks for the awesome photos he got last month, so I wanted this one to be someone else who would send him a letter in return: John 'Mule' Miles. 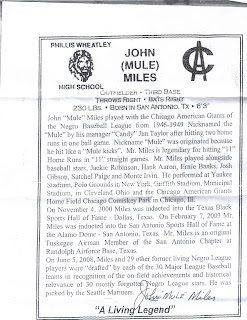 Mr. Miles didn't disappoint.  Chris wrote him a letter as neatly as he could.  It was like pulling teeth because this 6-year old gets bored and frustrated pretty fast, but we got the letter hammered out.  In return, Chris got the above biography, signed by Mr. Miles.  I included a couple index cards with the letter so Chris might get some quotations, and Mr. Miles obliged.  I think you all can read those fairly clearly. 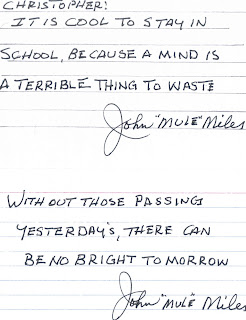 Finally, Chris got a letter as well: 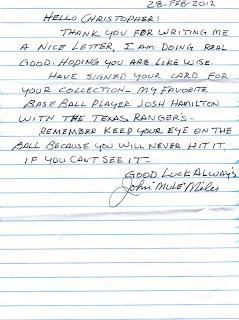 Hello Christopher,
Thank you for writing me a nice letter.  I am doing real good.  Hoping you are likewise.  Have signed your card for your collection - my favorite baseball player Josh Hamilton with the Texas Rangers.  Remember keep your eye on the ball because you will never hit it if you can't see it.  Good luck always, John 'Mule' Miles.
Posted by William Regenthal at 10:15 PM