No mail again, so I went to the Kinston card shop to pick up this week's Prime 9 card (Ernie Banks) and bought a bunch of loose cards and bargain bin packs.  Lots of junk wax in the bargain bin, but they are always fun to open.

I bought two packs of 1989 Donruss for 50 cents and the highlight of both packs was this Randy Johnson RC.  The good thing about 1989 Donruss is that it is a decent looking set and has a bunch of future HOF rookie cards in it.  Not bad at all.  The Big Unit looks a little annoyed that someone was taking his picture.  Oh well, 300+ wins and 4,000+ strikeouts later, he is bound for Cooperstown. 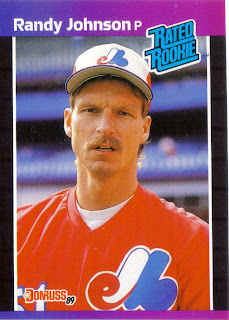 I got a pack of 1992 Topps Stadium Club for 75 cents and pulled this Matt Williams.  A very good player in his day, Williams was always a big pull for us when we were growing up.  He now coaches on the DIamondbacks. 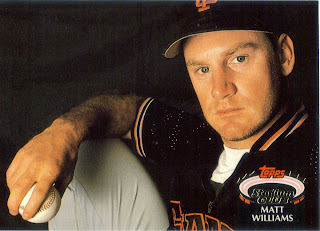 Finally, I got a pack of 2004 Topps Total for $1.  I didn't pull anything of note, really, except for this Jason Johnson.  My wife and I met Johnson back in 2001 and he was a really nice guy.  He was my first in person MLB auto.  Not too bad.  I still have mine, my wife's ball has faded. 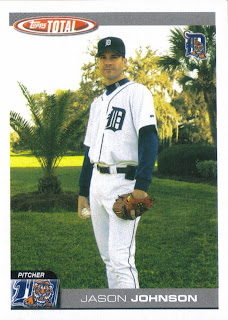 So, I didn't do all that bad considering I spent less than 3 bucks on the packs.  I'm going to go through the other cards from the packs and sort them out to my regular trade partners.  I hope I get to the loose cards I bought in the next few days, but we'll see.  I hope they get preempted by some good mail tomorrow.  That would be nice.

Posted by William Regenthal at 8:31 PM