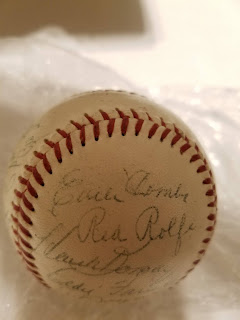 The next Hall of Famer on the baseball Mom gave me is Earle Combs.

Combs was elected to the Hall  of Fame in 1970 via the Veterans Committee.  He had appeared on 15 Hall of Fame ballots between 1937 and 1962, but didn't received more than 16% of the vote.  His career WAR, if anyone cares, 43.9; he had 7 seasons of 4.0 WAR or better, which is pretty good, even though I still don't understand the stat.  Regardless, for a veteran of 9 full and 3 partial seasons, Combs has some really good stats.

Earle Combs is my 148th Hall of Famer on a baseball.

Fun fact, of all of my baseball player autographs in my collection, Combs is my first to have played on the legendary 1927 Yankees.
Posted by William Regenthal at 8:56 PM

Very cool. Any other big names on this ball?