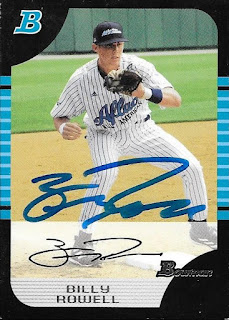 Billy Rowell was once a prospect in the Orioles system.  He was a first round draft pick, who, lets say, didn't live up to his potential.  I remember reading an article on him after he was drafted where he said he was on his way to the Hall of Fame.  I remember thinking "Ooh, hang on, kid" and here we are.

I had met Rowell back when he was playing for Frederick.  Long before I was graphing cards, I made sure to get Rowell on a baseball, since he was a former first round pick.  Thinking back, I wish I had been graphing cards back then, because I had a bunch of his stuff.  Now, all of his cards are buried in an Orioles box somewhere in my closet. 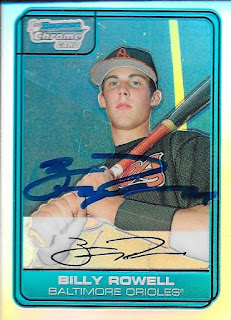 I did uncover these two cards fairly recently, and saw that Rowell was signing TTM.  I'm glad I sent them, because surprisingly, Rowell wrote me a note in return.  He thanked me for being a fan, and said that he had some good times in Frederick.  I really appreciated the note.  He was always nice to me in the times I met him, so I have nothing bad to say about him.  I just wish he had panned out.

I mailed to Rowell on January 13 and got the cards back on January 24, for an 11-day TAT.
Posted by William Regenthal at 8:52 PM