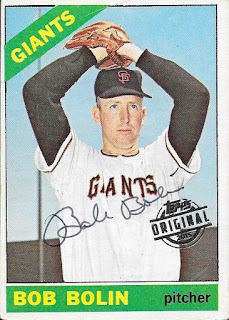 I'm not the biggest fan of the Topps buyback cards, only because they're perfectly good vintage cards that I could possibly use in sets, but Topps insists on stamping them.  Yeah, I don't want that in a completed set, so I had a couple buybacks that I wanted to put to use.  I sent this 1966 Topps Bob Bolin buyback out for TTM, along with a plain 66 that I already owned, and got both signed by Bolin in blue ink pen. 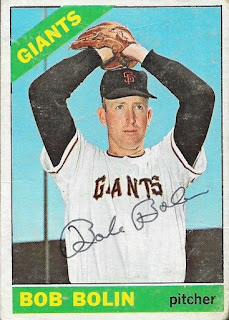 I mailed to Bolin on January 2 and got the cards back on February 6, for a 35-day TAT.
Posted by William Regenthal at 5:29 PM