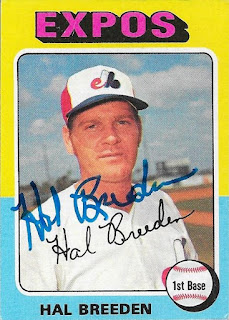 I waited a while to send these, for some reason, but I finally pulled the trigger and got these two cards signed TTM by Hal Breeden.  I think I waited because I thought maybe I had some more of his cards, but I never found them.  I was just happy to add a 1975 Topps to the album, since it has been a while since I got one signed. 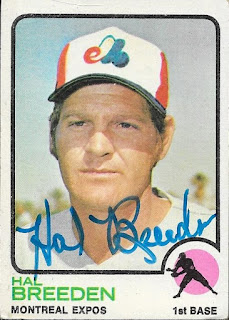 I also got this 1973 Topps signed out of the lot I got from Conrad in South Carolina.  A while ago, I didn't have many signed 73s, but now I have a bunch, and I have Conrad to thank.

I mailed to Breeden on January 20 and got the cards back on February 6, for a 17-day TAT.
Posted by William Regenthal at 10:45 AM