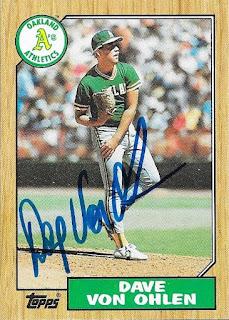 I was bored one day, and I checked a few guys I needed for my 87 set to see if I could find a way to get some cards signed.  One of them, Dave Von Ohlen, had signed through some private signings with a registered user on SCN, but he hadn't done so in a few years.  I reached out to the guy, and it turns out that he works with Von Ohlen and organized signings on occasion.  Since I reached out, the guy offered to get the two cards I needed done for a fee of $10.00 a card.  I got both cards back; one of them was the 87 Topps A's leaders card that was subsequently sent out to a Carney Lansford signing.

I mailed to the signing on January 3 and got the cards back on February 4, for a 32-day TAT.
Posted by William Regenthal at 6:00 PM