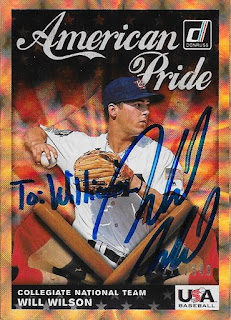 I was really happy to get these signed cards back TTM from former NCSU standout, Will Wilson.  The above Donruss American Pride card turned out great, even with the inscription. 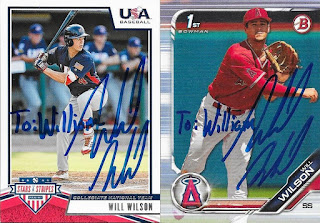 Wilson also signed and inscribed a 2019 Stars & Stripes and a 2019 Bowman Draft.

Wilson (b. 1998) is originally from Kings Mountain, NC, which is outside of Charlotte.  He was drafted in the first round (15th overall) of the 2019 June Amateur Draft out of NC State University.  He was traded to the Giants along with Zack Cozart back in December.

I mailed to Wilson on January 10 and got the cards back on January 24, for a 14-day TAT.
Posted by William Regenthal at 6:02 PM