A Bunch of Autos From Max 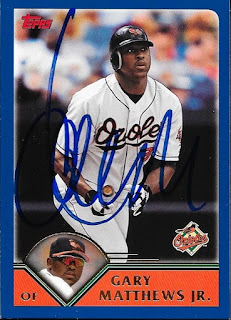 My good friend, Max, hooked me up yet again with some great autos that I got from Cubs Convention.  I had sent him several recently, and some were ones that I had been perpetually sending him over time.

I really like the above 2003 Topps Gary Matthews.  I had gotten him TTM a while back, but at that time, only had a handful of 2003s.  I finally got the bulk cards from my LCS, and this one was in that batch.

The above 2007 Topps Matthews is beat all to hell, and if I had to guess, it was in a lot of cards that someone sent me a while back as a care package.  I can't remember who, but the card is one that most people would have just thrown out.  I kept it, and upgraded it with a signature.  Now, the beat up card will take residence in my autograph album and will remain there. 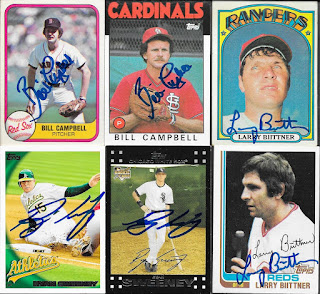 I felt like I had gotten some Larry Biittner cards signed before, but I couldn't find where that had happened.  I was able to get all of these out of some boxes, which is always nice.

I'm pretty sure that the Classic Jon Lieber was from a box of cards that Mal got me maybe 10 years ago, and still insists that I didn't like.  That's far from the truth, as I love looking through it here and there, and pulling cards out to get signed.  It's the gift that keeps on giving all year round, Clark. 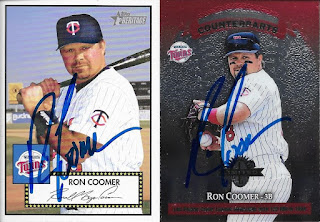 Finally, if Max had a dollar for every Ron Coomer card that I have sent him over the years, he would have a lot of dollars.  He got three more back to me, and they look great. 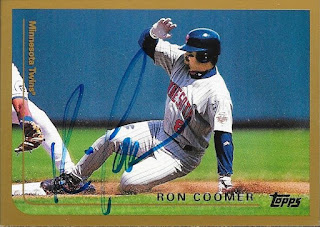 The sad part of all of this is that over the last 6 years or so, I've watched Max grow up.  He is about to graduate high school and go off to college.  His graphing days are going to be coming to an end for a while, as he embarks on the next journey in his life.  Thankfully, as things have gotten busier and busier for him, he still thinks of me, and messages me when he can.  I'm hoping we can get together and do some graphing at a Wood Ducks game in the future.  In the meantime, I'll keep an eye on him from afar, and know that he's going to do some great things.  Thanks, as always, for everything you do, Max.
Posted by William Regenthal at 11:22 AM