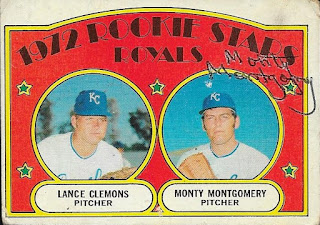 I dipped into my box of cards that I picked up from Conrad a while back, and added two of the cards to my autograph album.  Monty Montgomery really dug his pen into the above 1972 Topps.  The card was already a little beat up, so it doesn't really matter.  It's kind of funny, actually.  I won't be able to finish this card, as Lance Clemons passed away in 2008 at the age of 60. 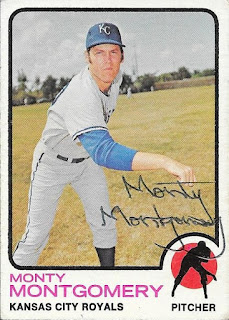 Montgomery also signed this 1073 Topps, which turned out really well.

I mailed to Montgomery on January 20 and got the cards back on January 29, for a 9-day TAT.
Posted by William Regenthal at 11:14 AM