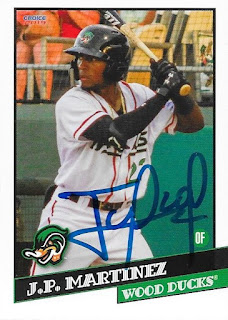 I had to consult my calendar, but it appears that my graphing stacks are backlogged all the way back to early July; before I went to the National.

So, here is the oldest series that I graphed and haven't posted.

I must have done pretty well during this series; I was able to get JP Martinez on my team set card.  He has been the toughest person to get to sign anything this season.  I try to not take it personally, but sometimes, you wonder if it's you.  Oh well, I haven't tried to ask him much lately, as he has just ignored me, so I'll just keep chatting with Bubba Thompson and Noah Bremer.  Those guys are super nice, and I'll leave it at that. 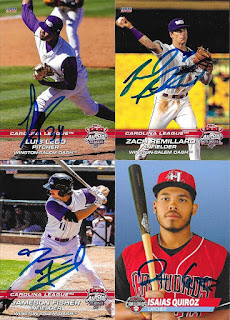 Isias Quiroz was up with the Wood Ducks for a brief cup of coffee, then went down with an injury, and I haven't seen him since.

I also got to work on my All Star cards that Michael sent me.  Most of the guys in that set got sent up to AA right after the All Star game, but I'll keep trying to get them signed.
Posted by William Regenthal at 7:09 AM