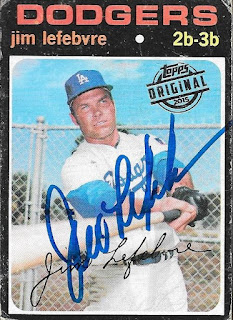 I didn't go through his line, because I was waiting on Jim Perry, but I was able to get this Jim Lefebvre card signed by either Michael or his uncle.  They were kind enough to get my stuff done while I waited on Perry.  I was glad to get this 1971 Topps Buyback card done.  I won't count it toward my Topps total, since it has the Topps Stamp, but it was really cool to get it done.