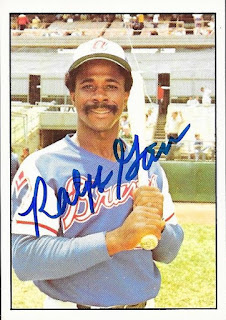 I waited in line for a long time at the National to get Ralph Garr.  As the show progressed over the week, I was able to get the free signers quicker and quicker, as I began to avoid getting in line, and instead, just checking back every so often, until I could get in the line and get through.

Garr signed slowly, and also took the time to speak to everyone and thank them for meeting him.  He was really nice, and I was glad to get this 1975 SSPC signed that Max gave me years ago.