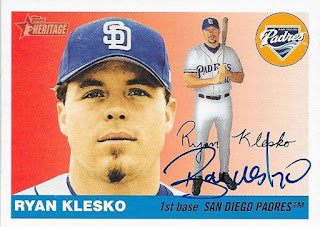 The first free signer of the National was at the VIP party, Ryan Klesko.  He was listed as a "free signer", so anyone could get him once the show opened to the public after the VIP party.  I got him at the party, and probably could have gotten him on the rest of the cards that I brought, but I was too excited to look at everything at the show.  So, I just settled on the three cards that I had at the party. 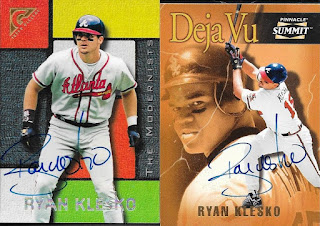 I feel like the cards that I chose were all really good choices, and will look cool in my album.  I especially like the 2004 Heritage, as it is the same design as 1955 Topps.  The card on the left is a 1996 Topps Gallery and the one on the right is a 1996 Pinnacle.

He appeared on the 2013 Hall of Fame ballot, but received no votes.  He was really nice when we met him, and seemed genuinely happy to be there.
Posted by William Regenthal at 7:10 AM