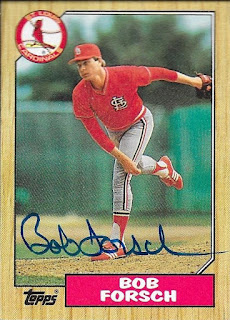 Here is another signed 1987 Topps that I picked up from the National.  This Bob Forsch looks really nice, and I didn't have to pay a whole lot for it.

Forsch died suddenly on November 3, 2011, due to a thoracic aortic aneurysm.
Posted by William Regenthal at 5:34 PM