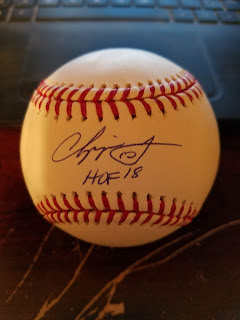 Every year that I go to the National, I try to add baseballs to my Hall of Fame collection.  The collection started in 2010, when I added Stan Musial and Bob Feller to the small collection I had from when I was growing up (Cal Ripken, Brooks Robinson and Jim Palmer).  From those first five baseballs, I had added some huge names and now I can proudly say that I have added two more to the collection.  Additionally, I picked up a ball of a surefire Hall of Famer, so there is the potential that this National could add three baseballs to the tally.

I added Chipper Jones to the list on Saturday at the show, after I had looked aroud and priced several baseballs.  This one was a little more expensive than the others, but it was on a brand new OMLB ball and came with the Hall of Fame inscription.  Because I bundled this baseball with another big name, I got this at a nicely reduced rate.

Jones becomes my 144th Hall of Famer on a baseball.
Posted by William Regenthal at 10:50 PM