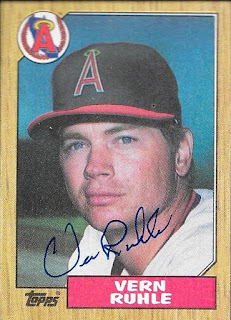 The first thing I did when I hit the show floor at the National, was look for signed 1987 Topps.  I saw a vendor that I remembered from Cleveland (last year) and noted that he had several signed 87s that I needed.  I picked up quite a few guys who were now deceased, and I want to try to post each one individually, if anything, so I can learn about each of them.

Ruhle died in 2007 after a yearlong battle with multiple myeloma (cancer of the plasma cells).
Posted by William Regenthal at 7:22 AM