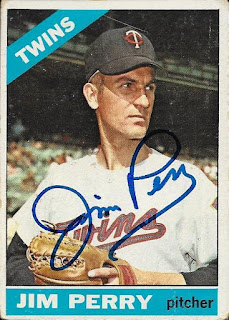 I was really excited to meet Jim Perry when it was announced that he would be one of the free signers at this year's National.  When I was in high school, my bus driver would tell me that he grew up in Williamston, NC with the Perry brothers and how he played baseball with them.

Jim said he thought he could remember him, but since I couldn't remember his last name, there wasn't much help.  I just remember him as Dave, and a super nice guy.

Perry was very talkative, and interacted with everyone.  I thought he was really cool to meet.  The line took a while, but to me, it was worth it.