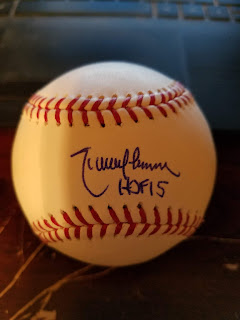 I added another baseball to my Hall of Fame collection when I picked up this Randy Johnson signed baseball from Mill Creek Sports at the National.  They are the same folks that I got the Chipper Jones and Ichiro balls from.

Johnson was elected to the Hall of Fame in 2015 when he was named on 97.3% of the ballot, his first ballot.

I priced several Johnson baseballs, and on the Sunday of the show, I got a great deal on this baseball.  It was the same price someone else quoted me on an older ball without the HOF inscription, so I had to jump on this one.

Johnson is my 145th Hall of Famer on a baseball.
Posted by William Regenthal at 9:48 PM