I've almost wrapped up my VIP signer posts from the National.  I have one more after this one, but first, here are the cards that I got signed by Bob Hamelin.

This 1994 Bowman turned out really well.  I didn't have many 94 Bowmans left in my collection, as a ton of them were ruined because they all had stuck together over the years.  Still, this one survived, and looks great signed. 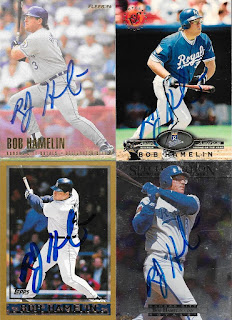 I also got these four cards signed.  I was able to use up all of my remaining Wild Card vouchers, which was nice, because some of them dated back to 2016.

He was the 1994 AL Rookie of the Year in a field that included Manny Ramirez and Jim Edmonds.  This was the strike-shortened season, and stats were curtailed, but Hamelin's 24 homers and .282 average beat out those other two future stars.
Posted by William Regenthal at 10:28 AM