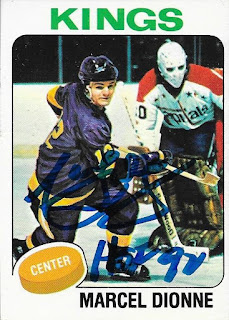 I gave away my VIP vouchers for Marcel Dionne pretty quickly.  I was going to focus only on baseball players, and had searched for cards for all of those guys.  Since I had no hockey, football or basketball cards, I sold or traded away all of those players with vouchers.  Then, on the day Dionne was signing, Max came to the show with a box of vintage baseball and hockey that he picked up, and sold to me for $10.00.  He (and I) figured that I could use the vintage cards for TTMs.  As I looked through them, I found these two Dionne cards.  I told Max "Ah crap, he's out there signing right now!".

I happened to have two wild cards on me, and luckily, they were taking them for Dionne because he signed so fast.  So, I got both of the cards done, and I was able to get rid of some wild cards. 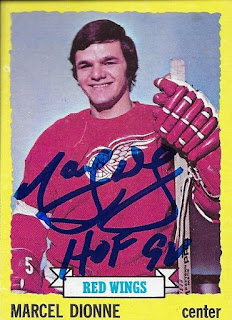 Dionne (b. 1951) played in the NHL 1971 to 1989 for the Detroit Red Wings (never heard of them), LA Kings and New York Rangers.  In his career, he had 731 goals, 1,040 assists, and amassed 1,771 points.  He was a 4-time All Star.  His awards include the "Lady Byng Memorial Trophy" which is awarded to the player who "exhibited the best type of sportsmanship and gentlemanly conduct combined with a high standard of playing ability" in the 74/75 and 76/77 seasons.

He was the winner of the Lester B. Pearson Award (now known as the Ted Lindsay Award) which goes to the most outstanding player, as selected by the NHLPA in the 78/79 and 79/80 seasons.  He also won the Art Ross Trophy, which is awarded to the top poinl-scorer for the season, in 1979/80.

Are the Red Wings any good?
Posted by William Regenthal at 8:31 PM