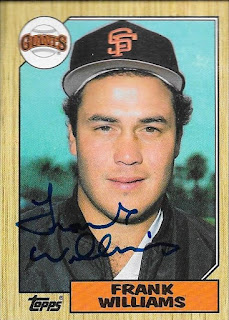 One of the cards I got at the National is also one of the tougher signed 1987s that I could have gotten.  This came from the first seller that had the signed 87s, and he had just recently broken up his signed set.

After his playing career was over, Williams suffered from a string of misfortune.  His marriage had ended and his twin brother had passed away; Williams battled alcoholism and was in a serious car accident.  Williams passed away in 2009 following complications from pneumonia.
Posted by William Regenthal at 5:33 PM