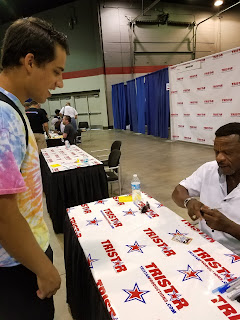 There was only one of the paid signers that I wanted to spend the money on and meet at this year's National.  Rickey Henderson has three cards in the 1987 set, but I paid for only two vouchers.  The third card, a Yankees Leaders card, is out TTM to Don Mattingly.  If that card had come back, I would have paid for a third voucher for Rickey.  Hopefully the Yankees Leaders card eventually comes back, and I can add him at a later date.

Since I had two vouchers, I figured I would let my good friend, Anthony, go through the line with me.  Anthony wouldn't have paid to meet Rickey himself, since he is a broke college student.  I figured he would enjoy the meeting, and as you can see from the photo above, he did. 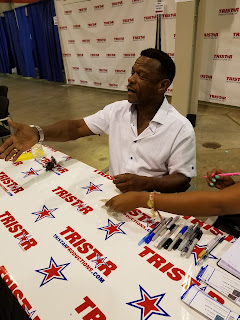 Rickey was really great!  I told him that even though he didn't know me, I felt like we were on a first-name basis.  He laughed and said "Well, that's good!" then smiled and shook my hand.  He came off as genuinely happy that fans came out to see him, and for someone who was as big a star as he was/is, I was impressed. 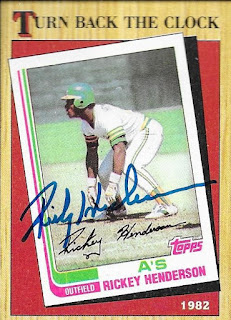 The cards turned out great!  Both of them look awesome, and I'm really glad to cross them off of the list. 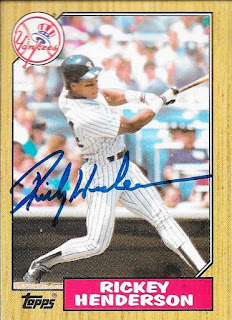 I just hope the other card comes back, and I can get Rickey again at a future show.
Posted by William Regenthal at 7:21 AM

You got some greats graphs at the National!

Very cool. He was just in San Jose a few weeks ago doing a signing. I regrettably didn't go... but I did end up getting his 1979 Ogden card signed. Hope you eventually get the Mattingly/Henderson card signed by both guys.

Very nice!!! Looks like you got some good autographs at the National.